DOG TRAINING IS ABOUT YOU:  BE AN EFFECTIVE CANINE TEACHER


INTRODUCTION
The following four true stories point out an uncomfortable fact: a dog’s success in training isn’t really dependent on him; it’s dependent on the level of knowledge and commitment of his handler.

Back in the late 80s, early 90s I worked at a kennel that specialized in training dogs. We trained dogs to be certified for police work, did some private protection work, as well as a whole lot of pet training and behavior modification (the fancy name for problem solving). A woman brought in a German Shepherd for training. She complained bitterly about his temperament and behavior; blaming the breeder for making such a bad dog. After a couple of months, she then went out and bought a Labrador Retriever. Within a very short time, the Labrador had the exact same temperament and behavior issues that the GSD had. It was at this point in my dog career that I learned that, “One dog may be the breeder’s fault, but a second or a third dog having the same issues...that’s on you.”

There is a great book out there called “It’s Not about the Horse” by Wyatt Webb. There is a passage in the book that tells how the author wants to learn more about horses and takes lessons from a dressage master. He is asked to groom, tack up, and ride an Irish Thoroughbred. He gets up and rides 100 yards over to the dressage arena. In that space of time the horse is moving with his nostrils flared, throwing his head, snorting, jigging sideways, and lashing his tail. When he gets to the arena he looks over at his instructor and says, “What did you feed this damned thing this morning?”

The instructor took the reins from him and said, “It’s never the goddamn horse. It’s not about the horse!” He then mounted the horse and, to quote, “…then put the horse through every possible move he could make athletically, and the horse actually looked happy while he was responding to his rider’s every request.”
​
A friend forwarded me a blog post of Susan Garrett’s titled, “Your dog is a reflection of your training.” Susan is a nationally known and respected agility competitor and instructor. In the post she relates that it took over two years for her first dog to earn her first Level I agility title. She then contrasted that dog’s career experience with her most current dog who at 18 months was working at the World Cup level. She goes on to say that the reason that the two dogs' relative successes were so different was that her relative skill and knowledge as their trainer had evolved.

At one of the many Cappy Pruett herding clinics I attended, the…semi…joke of the weekend (they were actually kinda serious about it!) was that the participants wanted to take a picture of Cappy and blow it up to life size so that when they went home their dogs would act the same. Participants would be in the pen struggling to follow the instructions that Cappy would give them. The dog would be doing anything but. Cappy would step into the pen, and within a short period of time, Cappy had the dog working like a dream. Same dog, the only difference being who was handling the stockstick.

I use the toolbox analogy a lot when it comes to teaching dogs. We talk about the toolbox regarding the dogs; how the skills and commands we layer in through our teaching sessions become tools that our dogs can use to figure out the puzzles that we ask them to solve. But what are the tools that are available to you the teacher to help teach your dog? 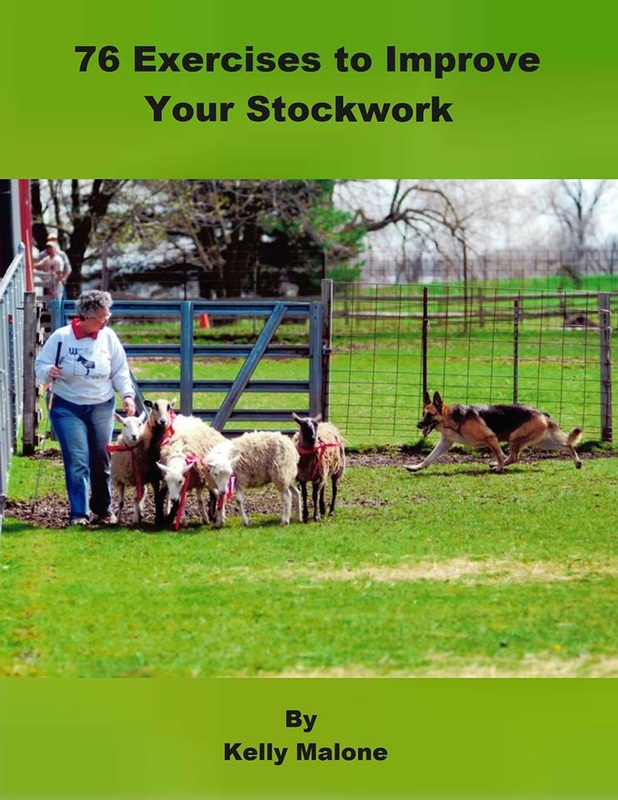 "76 Exercises" is a practical workbook designed to give you step by step exercises that start at the very beginning of working with your dog through to advanced trial work. The book is set up in easy to find and use sections that include: a before you start, foundation exercises, trial exercises, glossary, equipment and title explanation sections. "76 Exercises" can be of benefit to people wanting to find out about herding, people that are just getting started in herding, and people looking to problem solve or get a new take on a more advanced training issue.​
Can be purchased through AMAZON ...