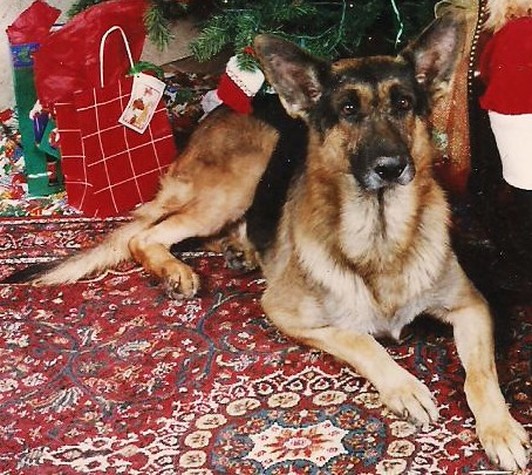 Dru's totem was quite a bit different from his brother's. His totem was Wile E. Coyote. He was totally uninterested in following ANY rules....house rules, conformation rules, and DEFINITELY, obedience rules. He constantly got into trouble with his brother for not following rules Quest knew had to be followed.

Dru had such a "different" outlook than most of the rest of us. Many of my friends mentioned his staring fixedly at....something that none of us could see. My friends were convinced that he saw spirits. I could hand him off to a client for an introductory lesson, and he would be fine. Twice I handed him off to people that thought they wanted to become dog trainers. Each time, he would work for them for three days. On the third day, the two people both came to me, kind of shaky and said, "Dru just tried to eat me!"  I guess he wanted to see if they had the Right Stuff. It was so out of character, because Dru always projected, "Who cares?"

When he earned his TC (GSDCA's temperament certification), I'm sure the evaluator thought he was drugged. No matter what happened; the gun shot, the weird stranger, or even the friendly stranger, his whole face and demeanor projected, "So what?"

At 6 years old , I took him for our first herding lesson. His ecstasy and enthusiasm screamed, "FINALLY!" She finally brought me to do what I was born to do. He was my first herding partner, and I couldn't have started with a better one. Two years after we started lessons, we went to the 1996 GSDCA Nationals for our very first trial. Only two dogs ended up qualifying in A course. Sheep were jumping out of the course left and right. Dru won High in Trial that day.
Dru was a confident, driven, talented and capable dog. He gave me confidence when I had none of my own. All of my students need to thank this dog. HE is the reason I got started. He is the reason I pursued this path.

Dru is one of my deepest regrets.  He handled my ignorance and arrogance, and never quit trying. When I think of Dru, I think, "If I only knew then, what I know now."   Thank you so much, Dru.