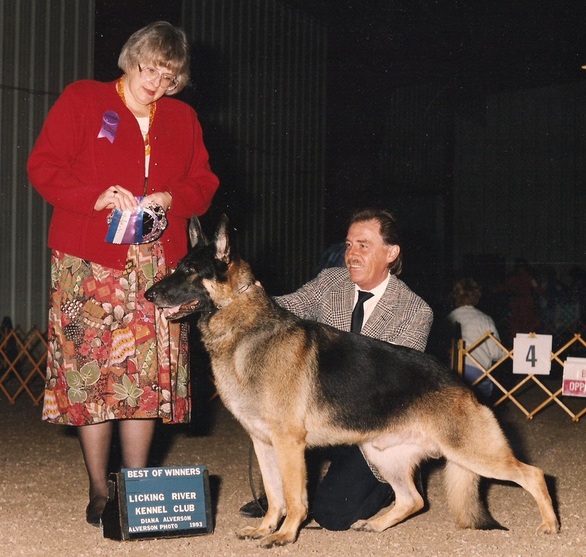 Quest was the very first puppy born under the Karma name.  I knew he would stay when, a half hour after he was born, he growled at being picked up.

Quest's totem animal was Dudley Do Right.  He simply didn't know how to do a bad thing.  He started being my demo dog for obedience when he was 6 months old.  When I started my own business, Karma Training, he was my star and partner.  All my clients wanted a dog, "just like Quest".

Quest started teaching me what I wanted in my breeding program, and what I wanted in my dogs.  Quest was my first canine partner.  Bear was my companion, and soulmate.   Bear went to work with me every day, but he was not an intrinsic, necessary cog in the business.  Quest was.   He helped me with clients, he helped teach other dogs, he went to people's houses, and businesses.  At one point, he did a career day at an elementary school and had 600 kids swarm over him over the course of a morning.

As Bear got older, Quest was de facto leader.  He always showed respect, but he played enforcer and bodyguard for Bear.  If anyone got a little too rowdy around Bear, Quest stepped in.  Quest always kept track that all the dogs were doing what they where supposed to be doing.  He took his Dudley Do Right totem seriously.

Quest was an inspiring companion, and business partner.  He was the beginning blueprint, and shining example for the Karma dogs that have followed.